I am changing my web address. The new one is http://www.zoegillings.com/
It's the same site just a different address.
Hope to see you there soon!
Zoe
Posted by Zoe Gillings at 12:59 AM 1 comment: 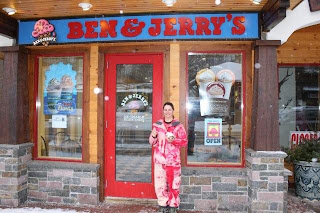 The Ben and Jerry’s ice cream shop is closed! I have been looking forward to going there all winter. It looks like it was just closed for the day so I hope it’s open again tomorrow :)
Posted by Zoe Gillings at 12:19 AM No comments:

Great News:- Champery, Portes Du Soleil is going to be our Base next year...

Well here is some great news I have just found out! I went to Champery, Portes Du Soleil about 6 weeks ago and it was absolutely fantastic... great snow, easy access to a great park with some sick kickers and all the training facilities our national team needs... I heard a rumour or two that it was going to be our base next year (British Snowboard Team) and I have just found this on the web...

In order to secure better training facilities in advance of the 2010 Winter Olympic Games, the British National Snowboarding Team has been in close discussions with the Swiss ski resort of Champéry – Les Portes du Soleil. Terms to the partnership which would establish the resort as the official training site for the Team are to be announced in the coming weeks.

Champéry, Switzerland – With the 2010 winter Olympic games clearly within sight, the British National Snowboarding Team have been holding close discussions with the Swiss ski resort of Champéry – Les Portes du Soleil. Accessibility, diversity of terrain, willingness to accommodate a national team and snow conditions were among the key decision-making factors for the partnership. After three months of preparations, the partnership terms are to be finalised and announced in the coming weeks.

Well appreciated and equally frequented by British skiers for generations, Champéry has remained small and unspoilt while still providing access to the world’s largest internationally connected ski domain - Les Portes du Soleil. Says Mark Simmers, CEO SnowsportGB, “Champéry is a true skier’s village and offers an ideal environment for aspiring athletes with the immense ski domain of the Portes du Soleil which offers a world-class infrastructure. SnowsportGB and the entire team are thrilled to be associated with Champéry and we look forward to finalising our partnership.”

Within 90 minutes of , Champéry – Les Portes du Soleil straddles the Franco-Swiss border with 194 ski-lifts and 650 km of pistes as well as 9 snowparks, 3 half-pipes and 4 boardercoss courses. Eric Belanger, Director of the Champéry Tourism, is equally pleased. “It’s a tremendous opportunity to be associated with the British National Snowboarding Team. In addition to sharing their realistic goal for a podium finish at the 2010 winter Olympic games, we also share their interest in developing snowsports in the important market. While it makes marketing sense, it’s equally exciting to be involved, even indirectly, with the Olympics and youth development in snow sports.”

While terms of agreement are yet to be disclosed, it is intended that members of the Snowboarding Team reside in Champéry during the winter season when they are not travelling to competitions. Currently ranked 4th in the women’s world boardercross standings, Zoe Gillings could become the ’s first ever female Olympic champion in a snowsport competition. While there is still much to do prior to the 2010 games, both partners are committed towards a podium finish.

I cant wait to move their next season...

Posted by Zoe Gillings at 12:55 PM No comments:

I made it onto the Podium! 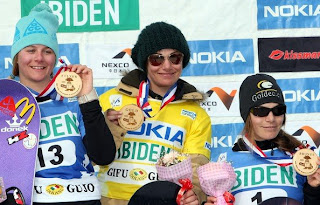 That was my goal for this competition because I was so close at my last comp in Korea. And I came 2nd!

I had some difficulty with the snow changing in qualifying so just scraped through in 13th position. This meant I had to fight in every heat to get in from the worst start gate.

In my first heat, I was in 4th going into the first turn, I passed into 3rd going around the 2nd turn and then into 2nd further down the course, I kept that position the rest of the way down. One girl got close to passing me just before the finish but she didn’t manage it.

The second heat was another interesting one, I was in 4th into the first turn again, the girl in front of me messed up on one of the jumps so I passed her in the following turn which put me in 3rd. I did the same move just before the finish that the girl had tried to do to me in my last heat but I succeeded where she hadn’t and I got into 2nd which qualified me for the final!

I got into 3rd going into the first turn. I had to keep the girl I had passed behind me while trying to catch the 2 in front of me. I passed Lyndsey Jacobellis (Olympic silver medallist) half way down and I held second place the remainder of the course, I got close to the leader (Maelle Ricker) at the end but not quite close enough to pass.

So I got silver! It’s the first time I have been on the podium for a good while and it feels great!

I am off to Lake Placid tomorrow for the next world cup. I have just finished packing.

Only one place further up to go!

Posted by Zoe Gillings at 3:09 PM No comments: 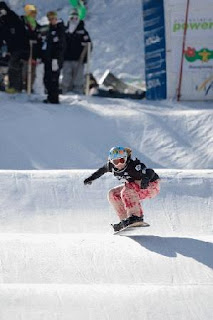 I qualified in 9th, so easily through to the heats.

I was worried about my first heat because I was against Lyndsey Jacobellis (the girl who fell just before the finish line in the last Olympics) she is very fast so I thought that was going to make things difficult. I pulled out of the gate fast and passed from 2nd to first in the second turn, I then led all the way down without any challenge!

My second heat was a tough one too, all 4 of the riders (myself included) have all won world cups at one time or another.

I was in 3rd going around the first turn but a risky line around the second turn paid off and I had got into 2nd. I might have been able to pass into 1st further down the course but didn’t want to push it as I only had to get in the top 2 to go through to the final, I stuck to my line and went through with no problems.

The final was also full of world cup winners, I unfortunately I had last lane choice so got stuck with the start gate with the longest line around the first turn so I was in 4th and I then fell two turns later trying to pass.

So I finished the comp in 4th, annoyingly close to a podium but a great result all the same.

This season is really turning out well! I was worried when my coach resigned 3 weeks ago but I have got into the finals in 2 of my comps since then! I am off to the next world cup in Japan tomorrow so I can’t wait to get there and try and get on the podium!
Posted by Zoe Gillings at 5:10 AM 1 comment:

One day after returning form the X games I was in Leysin (Switzerland) for the next round of the world cup.

I had trouble in the heats with an Austrian girl
careering into me. So I finished in 14th, which is not very good compared to my previous results in this season’s world cups but I still have a world ranking of 7th.

I am now in France training for just over a week before flying out to Korea for the next world cup. I have never been to Korea before so I am very excited about that and also about getting a chance to beat the Austrian girl who took me out in Leysin!
Posted by Zoe Gillings at 11:09 AM 2 comments: