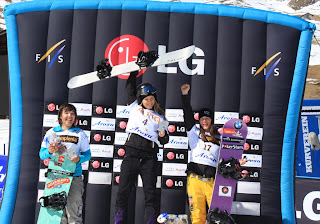 I have finished my competitions for this season now and I finished on a high with a podium at the world cup finals in Arosa, Switzerland.

We had training on the course on Tuesday then qualifying on Wednesday and the heats on Thursday. I had some trouble on the qualifying day so went through in 17th position.

In my first heat I got into, I think it was 3rd, out of the first corner then within a few seconds I was in 5th, then there was a big crash and I moved up into 3rd again. I stayed there the rest of the way down the course so progressed through to the semis.

In my semi final heat I had an awesome start out of the gate and I did the first few features really well too so got I into second out of the first turn. I stayed there all the way down so was comfortably though to the final.

In the final I had some trouble in the start gate, I thought it was opening but it got momentarily stuck so I slammed right into it! As I bounced back then it dropped so I was last out by a mile. I passed one girl over the first few features then I was in 5th position. Then around the second turn I was taking a high line behind the other girls but I saw that two of them were very close together and looking wobbly so I cut down at the end of the turn so I wasn’t directly behind them and I am very glad I did because they both crashed at the end of the turn. So I was then in 3rd and held that position till the finish so came third overall and won myself a bronze medal :) well actually I won a trophy, a big jar of gummy bears and some prize money :)

After the up and down season I have had it was really nice to end it on a high. The competition was also shown live on Eurosport so it was a good one to get on the podium at!

I am now staying in France for the next couple of weeks testing new snowboards before I head back to the UK next month.
Posted by Zoe Gillings at 2:06 PM 2 comments:

Its been a busy coouple of months but I've finally started to launch the first of several businesses to fund my World Cup Snowboarding program. I was also lucky enough to win 2 x snowbord cross competitions last weekend in Italy.

My latest website is http://www.zgbusiness.com/ which is the hub for ALL my business and sporting activity. From here anyone can navigate to my sporting website http://www.zoegillings.com/ or my latest e commerce venture http://www.zgelectronics.com/. As new businesses are launched they will be added to zgbusiness.com.

Following several requests I have now also set up a direct payment system where support can be made directly here. Any direct support is greatly appreciated.

or
Posted by Zoe Gillings at 10:31 AM No comments: